Dena Blizzard in One Funny Mother

Dena Blizzard, the viral video sensation and creator of the Back to School Rant (125 million views), Chardonnay Go (24 million views) and Chardonnay Go, The Board Game for Wine Lovers, Moms, and Other Shameless People has an Off Broadway Show!!!

Join this comedian, former Miss New Jersey, and married mother of three on her hilarious journey through the trial and tribulations of motherhood and marriage. Since becoming a married mother of three, Dena wrestles with the eternal question, â€œHave I gone crazy since having these kids?â€ and the answer is a hysterical, â€œLaugh â€˜til your face hurtsâ€ comedy you wonâ€™t want to miss!â€

One Funny Mother is an Off Broadway hit currently touring the United States, has been licensed overseas, and was recently name â€œBest One Woman Showâ€ at the 2015 United Solo Festival in New York City. One Funny Mother is a great â€œGirls Night Outâ€, or Date Night ro anyone that IS a mom, HAS a mom, or is MARRIED to a mom.

You can find Dena each week on her Facebook Live show, Tipsy Tuesday, at 9:00 pm EST. 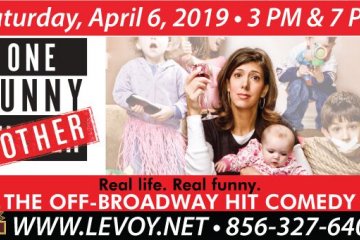