The Music of Cream 50th Anniversary Tour tells the musical story of the band who became known as the first â€œSupergroupâ€ and laid the foundations for many of todayâ€™s most heralded rock bands and musicians.

The sons and nephew of Ginger Baker, Jack Bruce and Eric Clapton â€“ Kofi Baker, Malcolm Bruce and Will Johns respectively, take the audience on a hallowed journey, interpreting and reproducing some of the most revered music of all time.

Through stories, anecdotes and images displayed via a sizable video screen behind the band, they integrate home movies and photos, some of which have never been seen before on stage and interplay with their bloodlines to create a show like never before. Taking the audience through a personal journey that is poignant tribute to a musical legacy without compare and musicianship still revered to this day.

This unique concert experience is truly an unforgettable concert for audience members of all ages. 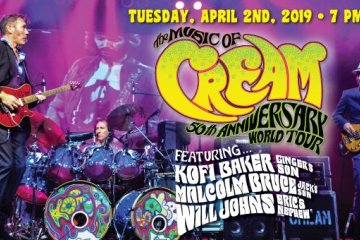