"That voice. You listen, close your eyes and you think it's Freddie. It's really uncanny."-Queen drummer Roger Taylor, Daily Record

"In the history of music, few voices have been as great as that of Freddie Mercury. However, the Canadian singer Marc Martel seems to be his very reincarnation." -Alejandra Orozco, Quarter Rock Press

When the band members of Queen announced their music contest, Marc Martel almost didnâ€™t enter. Yet his casual cut of "Somebody To Love" caught the attention of over 30 million viewers including Queen drummer Roger Taylor and guitarist Brian May. They crowned Martel the champion and skyrocketed the musician's dynamic career!

Martel is bringing his powerhouse sound with the Ultimate Queen Celebration in an explosive, commanding concert for two nights only. This once-in-a-lifetime night will rock Queen fans when the most iconic rock anthems ever collide with an unparalleled, eye-popping theatricality. The night includes hits like "Bohemian Rhapsody,"  "We Will Rock You, We Are The Champions," "Another One Bites The Dust," "Under Pressure," "Somebody To Love," and "Crazy Little Thing Called Love"¦ just to name a few! Martel also explores Freddie Mercury in a totally unique segment that captures the icon's musical genius ”as Martel puts it, You could call it a greatest hits show with a twist where I get to explore other things that I wish Freddie could have recorded himself and wonder what could have been.  Experience for yourself the superstar power of Marc Martel and the Ultimate Celebration of Queen! 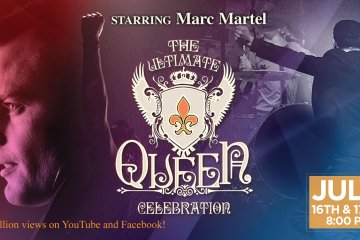