Based on a Conception of JEROME ROBBINS

By Arrangement with Roger L. Stevens

The world’s greatest love story, Shakespeare’s Romeo and Juliet, is transported to modern-day New York City. Two young idealistic lovers find themselves caught between warring street gangs: the ‘American’ Jets and the ‘Puerto Rican’ Sharks. Their struggle to survive because of their differences in a world filled with hate, violence and prejudice is one of this country’s most innovative, heart-wrenching and relevant musical dramas of our time. From the first notes to the final breath, West Side Story is one of the greatest American musicals ever written for the Broadway stage.

WEST SIDE STORY is presented through special arrangements with Music Theatre International (MTI). All authorized performance materials are also supplied by MTI. 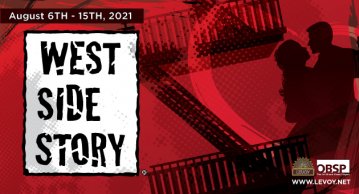