Just as the nineties dissolved into the 21st century, Lit charged up rock 'n' roll with uncompromising punk energy and a power-pop punch. However, the Orange County-born band left an imprint on popular culture that only fissured wider over the years like a California fault line. Who could forget the immortal lyric, "Can we forget about the things I said when I was drunk?" or the time Pamela Anderson devoured the band whole in the "Miserable" music video?

The group outlasted the next two decades as well. They stood out as the rare act whose presence could be felt loud and clear at Woodstock '99. Twenty years after its initial release, the Billboard Music Award-winning "My Own Worst Enemy" not only went double-platinum, but Post Malone also covered it on Instagram Live as did Kelly Clarkson and Jimmy Fallon on his late night show. Further speaking to their enduring influence, they've inspired think pieces by everyone from American Songwriter to Kerrang!, while Consequence of Sound named them one of the "100 Best Pop Punk Bands." Not to mention, their music blared through American Reunion, Central Intelligence, Parks and Recreation, Rock Band, and beyond as they also impressively averaged over 2.2 million monthly listeners on Spotify. The guys have amassed a catalog highlighted by fan favorites such as the platinum A Place in the Sun [1999], Atomic [2001], and Lit [2004].

In 2021, the quartet brothers Ajay [vocals] and Jeremy Popoff [guitar], Kevin Baldes [bass], and Taylor Carroll [drums] continue to do what they do best on their seventh full-length album (releasing in 2022) and debut for Round Hill Records. 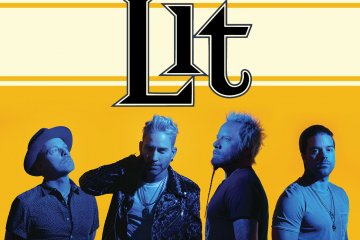