Superunknown "A Tribute to the Legacy of Chris Cornell."

Superunknown covers all eras of Chris Cornell, playing the music of Soundgarden, Audioslave and Temple of the Dog. They have already scored gigs playing the Gramercy Theatre in NYC, The Queen in Wilmington, and the World Cafe Live and Underground Arts venues in Philadelphia, where they connected with audiences desiring to hear the music of the late, great music legend.

The Ledbetters - A Pearl Jam Tribute:

The Ledbetters are THE ultimate Pearl Jam tribute band. Capturing an authentic recreation of Pearl Jam's studio recordings, combined with their intense live shows, The Ledbetters will bring you right back to your flannel-wearing days. Comprised of powerhouse singer Jamie Stem (Sinch), James

Burke on lead guitar, Steven Piperno on guitars, Rocco De Lise on bass guitar, and John Stover on drums, they accurately pay homage to the DEEP catalogue of iconic songs that influenced a generation. WHY GO see them? They'll make you feel ALIVE! 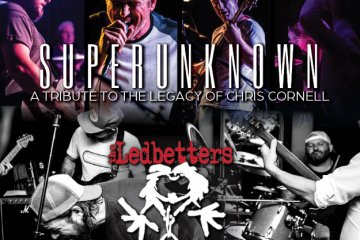