The Fudge is currently touring with three of the four original members: Stein, Martell, and Appice with Pete Bremy taking over for Tim Bogert when he retired in 2009.

Vanilla Fudge has been cited as one of the few American links between psychedelia and what soon became heavy metal's Vanilla Fudge is also known to have influenced other major bands such as The Nice, Deep Purple, Yes, Styx, Led Zeppelin, and Uriah Heep.

Beyond Purple is an explosive rock band that delivers on every level. Playing venues up and down the East Coast with energetic stage presence, bringing every song to life with stinging vocals, over-the-top guitar playing, and an amazing rhythm section. Beyond Purple replicates each and every song to the fullest potential.

Beyond Purple plays the greatest hits of Deep Purple, Whitesnake, Rainbow, and Dio -- all born out of the Deep Purple family tree. They are professional musicians with national act affiliations who deliver each and every show. This band is a must-see!

Beyond Purple Website: beyondpurplerocks.wixsite.com $44-$49, plus fees Doors will open at 7:00pm and the theatre's Vaudeville Bar will then begin serving. Merchandise will be available for purchase. 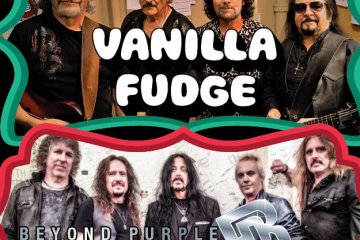