Doors: 7:00 PM Show: 8:00 PM Runtime: 60 minutes with no intermission Premium seating is available. Premium prices include a $20 non-refundable donation to the Levoy. The Vaudeville Bar will open and begin serving at 7:00 PM.

From his early days, opening for such legends, to presently bringing his hysterical, insightful, spot on commentary to sold out audiences across this country and foreign lands. Bobby Collins has established himself as, and remains, a Class Act.

Class act is defined as: One of distinctive and superior quality.

Bobby is noted as a Clean Comic. His numerous appearances at The White House, along with an impressive list of corporate and private functions have distinguished him as a Comic's Comic.

Bobby is a Grammy nominated comedian, for one of his six Comedy Specials. In addition to authoring 2 books, Bobby and his wife, staunchly champion his special needs daughter, through the family's annual Comics for a Cause Benefit.

Bobby Collins remains one of today's Premier Comedians performing to sold out theaters and clubs throughout the country. 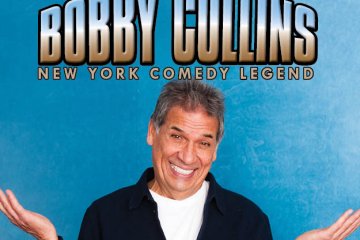