The Glasstown Arts District and Main Stree Millville are thrilled to announce the completion of the first mini mural in a series of three.

Artist Kenneth Lazan Faulk, Jr. of Atlantic City answered the Request for Proposals with his drawings of a music-themed mural.  One captured the essence of a fun musical tapestry.

The 10 ft X 12 ft mural is just inside the "tunnel" at 19 N. High Street in the arts district in Millville.  Faulk completed the mural after three days of painting and sealing.

Reaction to the mural on social media is positive and overwhelming.  Musician Kevin Smith aka/The Troubadour KP played live with a small band on Third Fridays for a few years.  After a hiatus, the wall was tagged with graffiti.

As soon as grant money for Creative Placemaking became available, the district knew exactly what type of mural it desired for that spot.

The Troubadour KP will be at Third Friday, September 20 and on October 18.  Those evenings of art and entertainment are from 6 to 9 p.m. 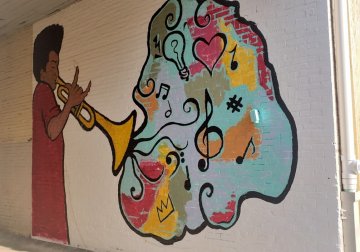