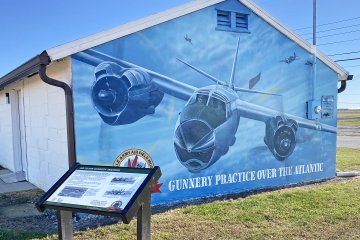 The museum is located at 1 Leddon Street inside Millville Airport with an entrance on Cedar Street in Millville.

The first mural commissioned is the large image on City Hall at 12 S. High Street, in the Glasstown Arts District. Over the years another 5 murals were commissioned depicting important events during the defense of the Allies in WWII. Artist Sam Donovan created all of them.

This 55 foot mural recognizes the important World War II aviation history of the Millville Army Air Base, America's First Defense Airport.  It was unveiled at a ceremony held on Thursday, May 12, 2022, at Millville Executive Airport and is located on a hangar prominently displayed amid buildings named to the New Jersy Historic Register in 2010.

The mural features images of World War II pilots William Rich and Bernie Borelli, who served at the Millville Army Air Field during World War II as combat flight instructors. Each flew numerous missions in P-47 Thunderbolt fighter-bombers from bases in England during the war. The two pilots, who lived locally until their passing, also served as chairmen emeritus of the Millville Army Air Field Museum.

Featured on the mural are images of P-47 Thunderbolts both on the ground and in the air as well as an automobile of the era when the base was an active center for the 10,000 men who served and trained here. The commemorative mural is located on the side of a 4,000 square foot hangar at the corner of Peterson and Leddon Streets, where it faces incoming traffic looking toward airport runways. It is among the first sights for visitors to the airport

During World War II there were no fancy electronic flight simulators. No computer screens with flashing lights and voices calling out commands. Learning to fly fighter planes and bombers was much more of a challenge one met eagerly and effectively by young, brave men and women who had a job to do to protect our country.

So how did these pilots of yesteryear ever learn how to fly and land at night and in poor visibility, let alone perform combat maneuvers in these conditions?

Link Trainer is the name that was given to an innovative series of flight simulators that were designed and built by Edwin Albert Link at his family business in Binghamton, NY.

The Link Trainer became famous during World War II when thousands were produced to help train pilots for war. The United States Army and Navy alone purchased 7,000 of these trainers.

In its day, and for more than 30 years, the Link Trainer was the premier equipment used for instrument flight instruction, up until the introduction of computerized simulators.

The Link Trainer flight simulator consists of four basic units, including the fuselage with pilot controls and instruments which sits on a revolving octagon base and the desk that holds the automatic recorder, remote indicating instruments, wind drift controls, communication equipment, and junction box, among other components.

Knowing that fires would occur both on airfields and, in the case of Millville, in the surrounding woods where gunnery training took place, the Army Air Corps organized base fire departments.

The Millville Army Air Field Fire Department began operations in 1943. While firefighters at Millville required specialized knowledge brought from the civilian world, they still maintained military order. Each base commanding officer designated a post fire marshal or chief. Fire crews worked in opposite 12- or 24-hour shifts, focusing on fire prevention and fire safety education when not fighting fires.

The Millville Fire Department immediately responded to the call to establish a station at the Millville Army Air Field. Charles Roedel served as fire chief at the air base and directed a crew of more than a dozen full-time firefighters. A building located right on the flight ramp was appropriated to house equipment and men. Four fire trucks were sent to the Millville Air Field by the U.S. government - two Fords, one GMC and an International. They arrived in standard drab green but were soon painted red by the Air Field Fire Department.

Many fire-training exercises and drills using controlled burns took place at the Millville base during World War II in preparation for accidents that could threaten base operations. The Millville Air Field Fire Department responded to aircraft crashes, on-base fires, and fires in the surrounding woods that were started by gunnery training. In addition, they were first responders to the crashes that took the lives of each of the 14 pilots who died while training here.

Of special interest within the fire department mural, artist Donovan used the likeness of local photographer and Millville historian Dale Wettstein (1943--2022).  Wettstein was a US Army veteran of the Vietnam War who also served as a Millville volunteer fireman for many years.  His likeness represents all firefighters -- past and present -- who serve their communities with courage and dedication.

The P-47 Thunderbolt fighter pilots stationed at the Millville Army Air Field during World War II honed their air-to-air gunnery skills by firing at banner targets towed by the Martin TB-26 Marauder medium bomber aircraft. For training purposes, these were special stripped-down versions of the bomber, being devoid of turrets, guns, and armor plate.

Air-to-air gunnery training at Millville was done at about 10 miles out to sea. The 50-caliber bullets in the P-47s were all coated with a special paint, and each pilot had a different color. As the meshed target was towed approximately 1,200 feet behind the TB-26 Marauder, each Thunderbolt pilot would have his turn firing at it. P-47s generally flew in a formation of three to five aircraft, each peeling off for its shot at the target. When the mission was over, the target would be dropped at the field. Each bullet hole would have a color around it indicating which pilot hit it. This training allowed flight instructors to determine which pilot hit the target and tabulate their accuracy.

The Millville Army Air Field thanked World War II veterans George Washington Whitehouse, flight engineer for the TB-26 at Millville, and Charles Osborne, P-47 pilot who trained at Millville, for their input in the creation of this mural.

Millville, New Jersey's Historic Boresight Range is one the last existing examples of what was once an integral part of air base operations for air-to-ground and air-to-air gunnery training during World War II. It is a testament to the aviation technology of this era of American history.

Boresighting is a term used to describe adjustments made to pre-align firearms sights for zeroing in (zero drop at X distance) on targets for accuracy.

In the case of the P-47 Thunderbolt fighter-bombers, which were the planes that trained at Millville, New Jersey, during World War II from 1942 through 1945 as with all aircraft of this type, a major factor in hitting the target was harmonization, or bore sighting, the alignment of guns and gun sight into a gunfire system.

At the Millville Army Air Field, and at military bases across the United States during World War II, aircraft and pilots prepared to go overseas to fight in the European and Pacific Theatres of war. Their mission was to participate in air battles to protect Allied troops and defeat the enemy by destroying its aircraft, ships and ground sites. Guns fired from these aircraft had to be accurate. Lives depended on this accuracy and there was no tolerance for mistakes.